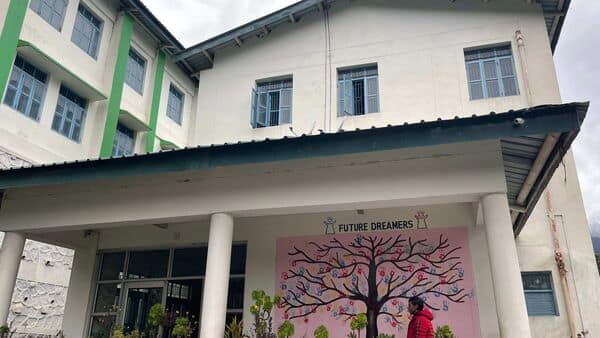 Pallavi Panwar, a petite girl with short hair, packing all the clothes and household items as her family is planning to move out of Joshimath due to the cracks developed in her house. Panwar’s house has been marked as ‘unsafe’ as several cracks have developed on the walls and floors. Panwar studies in Class 10 at Kendriya Vidyalaya school located at Sunil village, Joshimath. She has to appear for the CBSE board exams in February, but she is afraid about her career. Many of her friends have also moved out of Joshimath as their houses are also under the ‘unsafe’ mark.

“I don’t get time for preparation anymore. For the past 10 days, all we are doing is packing stuff, sleeping on the roads, and worrying about our house. 50% of the stuff we have shifted to our relatives’ place”.

Jagat Singh, a resident of Joshimath, has lived in the holy town for 47 years. Singh said that Joshimath is the exam centre of hundreds of students who stays in nearby villages. “Every year, students from neighbouring villages come to Joshimath in February and March for board exams. Most of them stay in hotels, lodges, or at locals’ residences”. Since the state government has marked more than 700 buildings ‘unsafe’, where these students will stay during exam time, Singh questions.

Bhagwat Pawar, who works in the hospitality industry told Mint, that his son has developed extreme emotional and psychological distress due to the current crisis. “My son, who is in Class 10 is unable to focus on his studies. His studies have impacted majorly because chaos has developed in the town. I hope the government takes some initiative for board students as well,” he said.

Pallavi Panwar said there are around 7-8 schools in the Joshimath region and her school KV has also developed some cracks.

Due to the harsh winter, all schools are closed in the town currently. Some schools will re-open during January-end while others will open on the first of February.

The Kendriya Vidyalaya school administration has asked parents about the status of their houses and whether they will be relocating or not, Pawar told Mint.

The strength of Kendriya Vidyalaya Joshimath is 558, Dharam Dev Yadav, Junior Secretariat Assistant Officer said. He said that the school has also developed marginal cracks on the entry staircase and the main corridor. He said, “The school has sent a message to all parents, asking them if they will be relocating or not. We are still collecting the data of students who will be moving out from Joshimath”.

On upcoming CBSE board exams and impact on Joshimath students, Yadav said, “The final call will be made by the CBSE board and Kendriya Vidyala Association”.

30-year-old Sashi, whose house has also developed cracks, is worried about the future of her two children. “We have spent our entire life in Joshimath, but I don’t know if my children will have the same fortune. Right now, I have sent them to Dehradun because all the rooms on our ground floor have developed cracks”.